I’m not going to discuss the enumerous advantages of IPv6 (which by the way do not start nor end in the very large address space). IPv6 has been around for a while now, it is no longer a test protocol, it is something quite stable and available in most of todays Operating Systems (Windows XP/Vista, OS X, Linux, BSD, etc).

Then what is impacting the migration from IPv4 to IPv6 ? The lack of a killer application. An application in which IPv4 under performs to such a large degree that users start mailing their ISP’s forcing them to deploy IPv6. Here is my guess on what that application(s) will be: P2P. 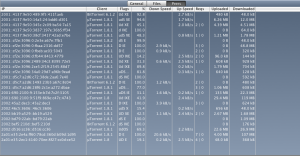 Why ? P2P has long had severe difficulty crossing NAT’s, and overcoming security/privacy concerns. For the wrong reason IPv6 can play an important role here: it can be seen as a darknet that can overcome the NAT difficulties and cross restrictive firewall which for the time being still ignore IPv6.

This trend can be found in this post from The Pirate Bay (probably the largest aggregator of BitTorrent Files in the Net).

The impact of such aggregator position of the matter can already be seen in various torrent downloads where a large number of peers are IPv6 enabled. The screenshot in this post shows utorrent for Mac IPv6 peers during a file transfer in a machine behing a very restrictive commercial firewall.

“But my ISP doesn’t have IPv6 yet… “ - That’s no excuse, you have great Tunnel Brokers such as SixXS.

Curious note, and probably the subject of a future post: “Why doesn’t Google Android - Linux kernel have IPv6 compiled in ?”