Having a kid is lots of fun, but also the most time consuming task one can have. Lately house chores were starting to create a backlog, since obviously kid would come first :)

That said, the family decided it was time to get some help, and we rushed to buy a Robot Vacuum Cleaner in order to get an “extra hand”. Some of you might say it was an impulse buy, and you are probably right… but the truth is: it is already paying off.

I bought the Roomba 555, which can only be found in Europe but is equivalent to the 560 model. I bought this model instead of the cheaper 520 model because I wanted the possibility to schedule the Roomba to operate while we are off at work. 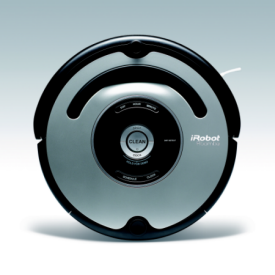 After an initial overnight battery charge we were set to give the Roomba chore: while me and my wife where handling meals (our’s and daughter’s) the Roomba was set out to vacuum the other rooms.

I must say that expectations weren’t either very high nor low… I knew it wouldn’t clean all spots but I did expect it to clean well those it could reach. My furniture disposition was slightly changed in order to make sure the Roomba didn’t miss as many spots (basically made room for the Roomba to reach every corner by displacing furniture a few centimeters).

The results were pretty good, although not as powerful as a common vacuum cleaner the Roomba was able to pickup all the dust in the floor (both wooden and tile floors which included rugs in both environments).

So far my only disappointment with the Roomba is that it fills up too quickly. Fortunately its quite easy to remove the dirt from the Roomba (same can’t be said of the hairs that get stuck in the brushes of the Roomba), and since there is no bag it is an economic task to clear the contents of the bin often.

Overall I think it is a great investment in your personal/family time.