Two years ago I had a first experience with a device that enabled me to monitor my power consumption habits per equipment. It was very educational and enabled me to switch off and remove some less efficient equipments which were basically vampire equipments. Unfortunantely the device can only monitor one equipment at a time and has no interface through which to get data out.

Leaping two years time, I’ve recently received a contact from ISA to became one of their beta testers for their iMeter product. In no time I received an iMeter Kit such as the one on the image.

The Kit comes with a clamp which needs to be installed in your house power distribution unit (after your energy meter) and a transmitter that has an internal battery. 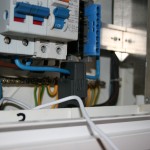 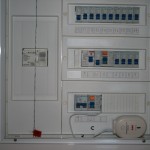 The supplied kit has two other devices: a display unit which can be used to measure energy consumption in almost realtime (~6sec) and an iMeterBox which connects to the internet and to ISA’s enerbook.pt website where a log of my power consumption is stored in periods of 1 hour averages. Both the display and the iMeterBox are very easy to setup as they automagically detect the transmitter via RF (Zigbee?) and start displaying/publishing my power consumption (this actually leaves me with some doubts related to security and privacy of the system) and the iMeterBox that is connected to my home router uses dhcp (I’ve not seen any way of configuring a fixed IP address in the equipment, although it has an admin webpage). The website needs nothing more than a user registration (username/password) and the S/N of the iMeterbox to associate to the enerbook.pt account (multiple iMeterbox’s can be associated to a given account).

The website is very friendly and to my surprise produces graphs using JS and Canvas (no flash there!). It can be used to monitor daily, monthly and yearly consumptions as well as to compare any two days, months or years. This is actually one of the points that in my view needs improvements, since it is very inflexible the configuration of time periods to visually monitor (e.g. most obvious time period to monitor is a week). Good thing is that you can export to XLS format and do your own data processing.

In the period of one week I’ve detect several devices in my house which were power vampires (namely an oven that consumed 60W and ZON HD+DVR which accounted for extra 70W). By switching off these devices completely I’ve been able to reduce my standby power usage (period of time where I’m not at home or asleep) by 20%. This value clearly show’s the potential of this equipment in terms of power saving.

In summary: the iMeter is a great product, but still has plenty of room for improvement.