For some month’s now I’ve been using Moves.app which was recently acquired by Facebook. Moves allows me to track my daily activity through the use of my smartphone accelerometer and GPS. In the end of the day/week, I’m able to analyze how much exercise I did, as well as where I’ve been to… The last feature being the one which I would rather not disclose to Facebook. Moves works great except for a tiny detail, that has become a big one: It eats up all the battery. I was still using my iPhone 4S when I started using moves, battery would drain before the end of the day. My Nexus 5 is holding better, but still it’s taking a big hit.

Moves also got me interested in Quantified Self and lead me to look into alternatives such as the fitbit or jawbone up. These are basically pedometers that you can wear in your wrist next to your watch. They look very nice but are quite expensive for a pedometer.

Then a few weeks ago I found the Vidonn X5 which I purchased from dx.com. With a very attractive price, it features a pedometer and an OLED display which doubles as a watch. The Vidonn X5 has a single button which you can use to check your steps, calories and distance walked, as well as to enter in a special training mode which can track a subset of your day such as a run. The device is very small and light with a battery that can last for almost 4 days, the display is detachable from the bracelet in order to charge and synchronize with your PC (Haven’t found any version for the Mac). There are nonetheless some issues with the Vidonn X5: under direct sun light it is impossible to read the OLED display making it useless, and steps taken? well lets just call it a rough estimate… Even soo it is a great device that can be used to put your week into perspective (when were you more active, are you being last today, etc).

There are companion apps to the Vidonn X5 for both Android and iOS, but unfortunately I consider them being of poor quality. 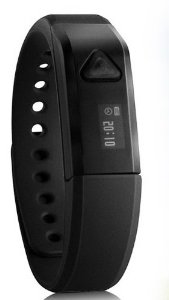 This pretty much settled the motivation to develop an alternative Android application to read the data from my new device. Since the Vidonn X5 communicates over Bluetooth LE, it was very easy to retrieve information using a Bluetooth developer tool such as LightBlue. Equipped with patience and differential analysis, I was able to decode the Bluetooth Characteristics of the Vidonn X5.

I believe my app can be of use to many people, so I decided to publish it on Google Play for others to use. The app doesn’t feature (yet) any sharing option (export to a spreadsheet, Twitter, Facebook, etc), nor does it track more then a week worth of workouts (amount of data kept in the device). There are certainly bugs around, but if you installed the app I would appreciate to ear from you, be it praises of critics.

I’ll keep a page dedicated to OpenVidonn, so please leave any comments related to the app there.